There is actually a cat of some importance in this story, but it’s not half as lost as Masaomi is most, if not all of the time. He is an artist, of course, and cannot possible be bothered with the mundane trivialities of life. One should not bother to do things one dislikes or isn’t good at, according to his philosophy. Ah, blessed are those innocent souls who never had to actually work for a living… This attitude is also why he doesn’t cook; as a result, his diet consists entirely of Calorie 8 bars (a thinly disguised stand-in for nutritional energy bars CalorieMate), and beer. 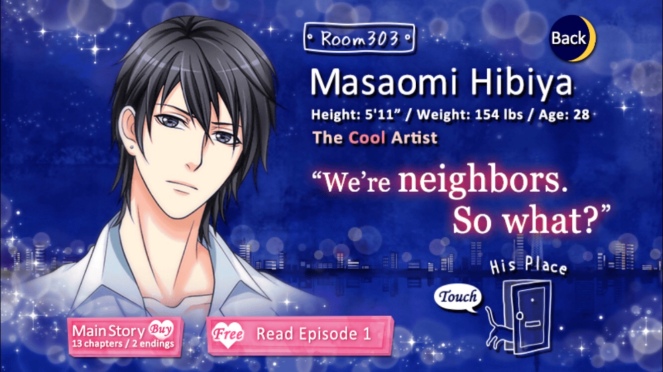 Our MC first encounters Masaomi while he is roaming the streets of the neighbourhood, completely lost. Like a kitten. Alone. In the rain. After taking him home and drawing him a rough map, it becomes evident that he couldn’t use a map to navigate to his own bathroom if he tried. Direct quote: “You don’t read maps, you look at them.”

So, he’s a little bit weird, and a little bit demanding, but his music stirs the soul. While the MC’s coworker, Shoko, is in tears daily because of OMI’s hiatus, the MC herself finds that she is enchanted by the melodies she hears floating across her balcony. One evening, in an effort to hear better, she leans against the separator and, seeing as the thing is apparently cheap, breaks it with her weight. Now that their balconies are connected directly, Masaomi starts to drop by much in the way of a stray cat: after the MC invited him to eat over ONCE, he now regularly shows up demanding to be fed again. It turns out, real food might be more interesting than power bars, in the long run.

One night, when the MC is already in bed, Masaomi straight up walks into her apartment in order to borrow her rice cooker. Not that he’d know what to do with it, but he is hungry. She obviously cooks for him, because the boy threatened to wash the rice with soap, and then agrees to find him a rice cooker for his own apartment, seeing as she is a bit of an expert, working in the field and all.

The two settle into a comfortable routine, almost as if they were a couple already. It is at this point that Byron warns the MC not to fall in love with a celebrity: they are from different worlds and, inevitably, she would end up with a broken heart. By then, of course, it’s already to late. Of course she’s in love with him, and from his demeanour, it’s obvious that he has feelings for her, as well.

And this is, precisely, when disaster strikes. On an outing together, Masaomi has to grab the MC to keep her from falling into a lake (our MC tends to be somewhat clumsy), which is, of course, the exact moment some random paparazzi takes a picture of the famous OMI. The next day, said picture is all over the news, and the hunt for the mystery woman is on. To make matters worse, OMI’s manager shows up to tell the MC that she should stay away from Masaomi, lest she cause him even more trouble. 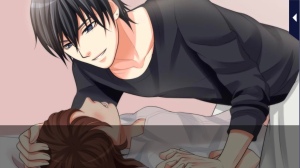 That night, when Masaomi comes over to be fed, the MC pushes him away, telling him not to ever talk to her again. The next morning, the separator between their balconies is finally fixed, and Mr. Narita, the building manager, offhandedly lets the MC know that Masaomi moved out. The MC knows she should be relieved, now, that she’ll never see him again. But how does one forget about a massive pop star, whose new single is about to drop?

Since I took advantage of Voltage’s promotion where the main route was offered for free, I didn’t play the epilogue.

So, basically, we have the MC taking in a stray kitten. An awfully skittish one, at that. He demands to be looked after (he cannot ever find the grocery store on his own), cooked for, and entertained at his convenience. He is observant; much as he likes to deride the MC’s love of plum brandy, he makes sure he brings some around when they hang out together. He likes the MC, and we know it: it is everyday implied, but never expressed, as the quote from “Sense and Sensibility” goes.

In the beginning, the MC is… confused. She cannot understand how Masaomi manages anything at all, seeing as he apparently has not skills beyond music. Her taking care of him begins with a sense of duty towards her fellow human. You can’t let a kitten starve, after all. Their love grows from the easy companionship that develops between them.

Remember, this is one of the games that has an invisible Love Meter. I cry foul. The first time around, I got the Good Ending, which is okay, but, you know, a tad meh. So I played it again with some minor adjustment, and, voilà, all Happy Ending and such. Much more satisfying.

I very much liked this story. Masaomi really does remind me of my cats: feed me! Pet me! Go away! Come back! Pet me more! No, not that way! I’m hungry! He approaches the MC kinda sideways, looking at her out of the corner of his eyes. From behind his sunglasses, of course. He does not actually ever really pull away. He might not be very expressive in words, but his gestures always ring true.

While the “crisis moment” is inevitable in this sort of narrative, it was one of the mildest I’ve ever encountered, and resolved relatively quickly. Masaomi’s route is exactly the soft, sweet, and quiet story I had been hoping for.